A few Pro Tour teams have revealed their fancy new kit designs for 2012 recently, most notably Omega Pharma-Quick Step and Lotto-Belisol. These kits are, for the most part, tame and rather conventional, which got us thinking about some of the ugliest, most repulsive Pro cycling kits of all time.

As a euro-centric sport, cycling comes off as a sport full of outlandish characters by our American standards for professional athletics. Tight spandex, colorful outfits, shaved legs…the list of emasculating traits goes on and on. And perhaps these peculiar personalities provide the fuel to create the excessively colorful, creative and ghastly designs that frequent the peloton year after year.

Sometimes the graphic risks pay off, resulting in fan favorite kits like the argyle of the Garmin-Slipstream team or the jelly beans scattered across the Jelly Belly jerseys. But more often than not, these forays that push the limits of cycling fashion result in epic failures. We’ve compiled the five most atrocious designs below. We also acknowledge that some of you may feel differently, which is why there’s a comment section so you can participate in this discussion too. But if you seriously think any of these kits are attractive, you need your sanity checked.

Did a box of crayons melt all over this guy?

I know some people loved the bright colors randomly blocked across the Mapei kits, but how can you expect to be taken seriously wearing this? I mean look at this guy, does he look very intimidating? He looks like a pre-schooler who spent an hour unsupervised with a set of watercolor paints, which is probably the point because Mapei did evolve from a small paint producer.

Mapei was one of the strongest teams of the late 90s with a powerful stable of classics riders, winning Paris-Roubaix five times between 1995 and 2000. But they will unfortunately be remembered for their hideously colorful kits rather than their results on the road.

The bad boys of Rock Racing.

The polar opposite of the Mapei kit comes from Rock Racing, with the team’s “Bad Boy” persona enforced by its anarchist kit design. Full of skulls, stars, stripes, wings, anarchy symbols and bright colors, Rock Racing unveiled 17 different kit designs in three forgettable seasons. The team does get points for being different – everything new feels weird at first because it’s different. But cycling wasn’t ready for Rock Racing. This band of cycling outcasts comprised of riders tainted by doping scandals was pretty bad-ass, showing up to races with tricked out Escalades and hot chicks in team-branded apparel. The problem was, they just weren’t likable, and their kits were probably the biggest reason.

One of Mario's nicknames was ironically The Lion King.

Not even the great Mario Cipollini could make this one look good. I would love to know who actually came up with this and how they could have possibly thought zebra stripes were a good idea. Of all the animal prints, it has to be one of the lamest. Now tiger stripes, that’s at least an intimidating animal that would justify some possible design cues. Zebras are basically weird horses, you can’t even ride one because they have never been domesticated. 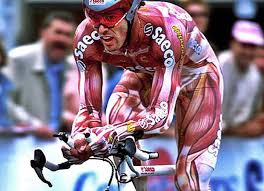 His antics and showmanship were good for the sport. Where the guys of Rock Racing were annoyingly unconventional, Mario the Magnificent was captivating and flamboyant. However, this kit is in no way acceptable and all images should be censored from the internet from here forth.

“Kids, cover your eyes, for some reason those men are riding in the nude…oh never mind, it’s just the ugliest kit I’ve ever seen,” said the cycling fan to his children. If these kits were actually gold instead of flesh, they would still look horrible, but they may have looked decent enough to make it off this list. Someone clearly made a mistake in the factory, using caucasian-flesh instead of bronzey gold to construct this kit. If the jerseys matched their bikes, they would have been in much better shape.

And how about that footprint on the front? First of all, you can’t even tell what the image is while the rider is on his bike because he is hunched over the handlebars. To me, the footprint is a reminder that this kit design is the doormat of all kit designs.

(For a good laugh that ranks high on the unintentional comedy scale, check out this video from the team’s kit unveiling in 2010.)

Let these failures be lessons to those graphic designers out there so we can learn from our mistakes and never, ever repeat this ugly chapter of cycling’s rich history.

These poor cyclists look embarrassed. I would be too if I had to race in a flesh-toned kit.